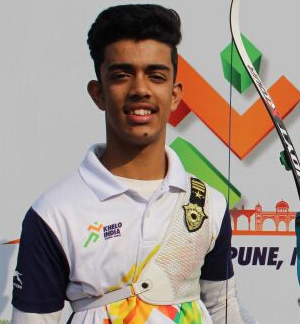 Vinayak had always seen his father indulge in sports that got him interested in the field. He was 9-years-old when he chose archery as a sport. The initial 3 years, he would practice the basics and then he focused more on the recurve event. Vinayak looks up to his father as his role model and the biggest support. His father taught him to play Archery at the initial stage.

Vinayak recalls his fondest memory of the sport was getting selected for the World Archery Youth Championship. His personal goal is to get selected for the main team and then defeat some of the best archers from Korea, as it remains one of the best nations to produce world-class archers across the globe.

Vinayak’s training involves going for a jog at 5 am. After he gets back home, he leaves for the training arena where he trains till 1 pm. And in the evening he trains till 6 pm. Badminton is Vinayak’s second favourite sport that he likes to play with his father at leisure.