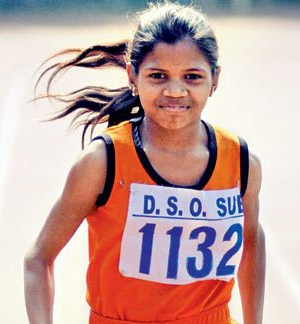 "Diminutive Tai Bamhane, she was up against the Kerala duo of Priscilla Daniel and Sandra AS. And, from the distance, he only had to watch her body language when she entered the track.

He need not have worried as Tai Bamhane – a Warli tribal from western Maharashtra – ran the two-lapper with the assurance and fearlessness of a seasoned runner.

The 15-year-old student of Marathi-medium Vidyaprabodhini Prashala (Nashik) stayed ahead of her rivals, both of whom had clocked faster times in the semifinals heats on Thursday, and won in 2:13.37. As Tai chugged home to gold"