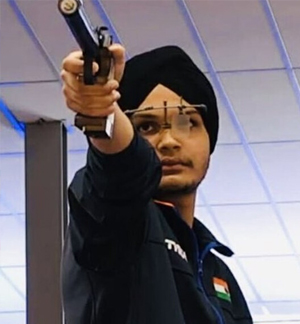 Sarabjot was in Class 7 when a summer camp took place in his school, which had many sports including hockey and football. This is where he had his first brush with shooting. Sarabjot recalls that his father was never a big fan of the sport and it was a big challenge to convince him.

Sarabjot has been shooting since almost 6 years now. While he took a break of 2 years from the sport in class 9 and 10 but later decided to pursue it as a professional sport. His fondest memory remains getting selected for the World Cup in 2019. He got emotional when the news was broken to him. Sarabjot hopes to bring glory to the country and wants to become one of the best shooters from India.

Sarabjot’s father is his role model and he looks up to a former Hungarian shooter who had inspired him to choose the sport. Sarabjot used to watch his videos on YouTube in his initial days to understand about the game and techniques involved in it.