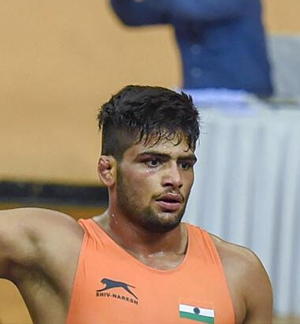 Back in 2011, Sajan was admitted to Pratap Sports School where he developed an interest for wrestling after 5-6 months of joining the school and has been wrestling since then. Sajan remembers bagging bronze at the 2017 World Junior Championship and won silver at the next edition of World Junior Championship and became the first Indian wrestler to win back-to-back medals at the World Championship. He fondly remembers the love he received from his parents, relatives and people from his village on returning home after the championship.

Sajan now aims to win a medal for his country at the Olympics and also wants to be the best wrestler in his category. Sajan’s first wrestling session begins at 6 am and ends at 9am. Post lunch, he goes for his second session which begins at 4 and ends at 7pm. Mr Rajbir Chikara, a former Greco roman wrestler is Sajan’s inspiration and he looks up to him as the former champion inspires and motivates him to achieve greatness in the field of wrestling.