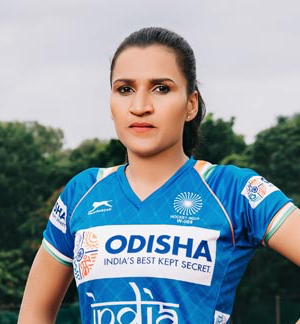 A captain of the women’s Indian Hockey team, a clinical forward with a knack for scoring crucial goals and capable of doubling up as a midfielder, Rani is considered as one of the best women hockey player in the world.

Rani Rampal led a young squad to the fourth-place finish in the Tokyo 2020 Olympics, the Indian team’s highest finish at an Olympics in just its 3rd appearance. Debuted in 2008, 14-year old Rani old at the Olympics, she became the youngest hockey player India ever fielded. She scored 5 of the 7 goals India netted in the competition.

A Padma Shri and Dhyanchand Khel Ratna awardee (2021) comes from a humble background, but her talent, determination and passion towards the sport have taken her to the peak of the game.