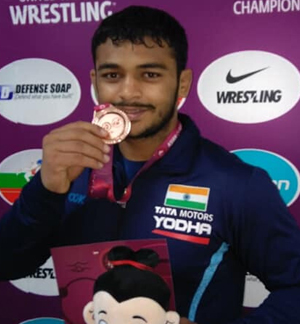 Deepak’s family including his grandfather, father and uncles were always fond of wrestling and as a child he would wrestle with other kids in his village. Being in the wresting fray since 2008 Deepak’s role model has been the double Olympian, Sushil Kumar.

Deepak is eyeing the Tokyo 2020 Olympics and is determined to bring a medal for India. He starts his day at 3:30 am with training session, which includes running, chin-ups and different exercises and the session ends at 8:00 am followed by his evening training session from 4:00 pm to 7:00 pm where he performs Dand baithak (sit ups) and works majorly on the technique part.