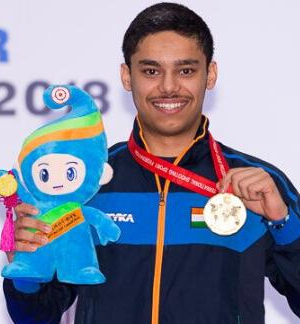 As a child, Vijayveer used to play cricket just like all his friends and had never thought that one day he would emerge as one of the most promising shooters of India. Back in 2015, he took part in a sports camp in his school that had sports like skating and shooting that fascinated him. After that Vijayveer decided to play shooting as a sport and has been playing for 4 years now. Vijayveer’s maternal uncle has helped him a lot during his initial shooting days and supported him during hard times.

In 2018, Vijayveer won the gold at the ISSF World Cup, which he is also his best memory and recalls giving him goose bumps on watching the Indian flag held above others.

Vijayveer gets up at 5 in the morning for his physical training that includes running and performing yoga and meditates for improving his concentration and focus. He visits the shooting range around 9 am and practices till 2 pm. In the evening around 5 pm, again he goes for his physical training and trains for about 45 minutes before calling it a day. He is fond of watching movies and likes to rest whenever he gets time and feels that rest is one of the most important things for an athlete.